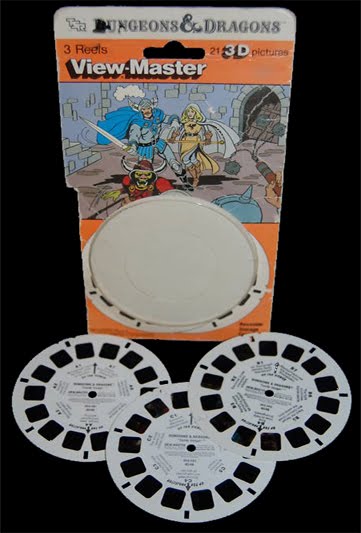 From the back of the packaging:

Strongheart™ Good Paladin and his worthy band of adventurers climb craggy rocks to the castle stronghold of the evil Venger™. Long has Venger held power in these mountains by terrorizing people throughout the kingdom. Monsters scurry to attack Strongheart's crew and defend Venger's cursed fortress.

Strongheart urges his troops over the walls of the castle. Seeing humans advance upon his legions, Venger hisses, "I will summon a special servant," and an Earth Elemental™ ponderously rises from the courtyard. In turn, Ringlerun™ Good Wizard conjures an Air Elemental™. Defeated, the Earth Elemental falls; but the battling warriors, both good and evil, are overwhelmed by these elements. Venger casts a withering spell on a weakened Strongheart.

Elkhorn™ Dwarf Fighter and the remainder of the the keep of Venger's castle. Fighting monsters all the way, they discover a secret treasure chest, and inside the chest, a glowing amulet - the source of Venger's power. Meanwhile Mercion™ Good Cleric removes the spell from Strongheart. The troops reunite in the courtyard where Venger summons his most powerful monster, Tiamat™. Breathing fire, Tiamat advances. Strongheart, wearing the amulet, poises his sword for battle. Then suddenly succumbing to Ringlerun's™ magic, the massive Tiamat falters. Venger and his monster flee the land leaving Strongheart's crew victorious in the castle - the kingdom at last is at peace freed from the curse of "Castle Venger!"